On This Day in 1492, Columbus Sailed the Ocean Blue 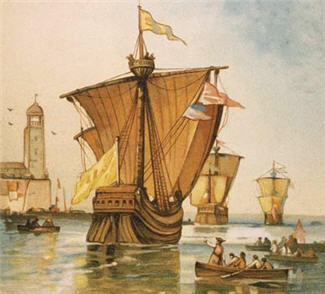 On August 3, 1492, Christopher Columbus set sail from Palos, which is in southern Spain, with 90 men and 3 ships, the Niña, Pinta, and Santa María. Find out the privileges granted to Columbus by the king and queen of Spain (Did you know he was given the title of Admiral of the ocean and of the land he discovered?). Learn about events leading up to his voyage and the intriguing proposal he offered to Queen Isabella. Then, step through the events of the voyage with Columbus himself through his journal entries and read his account of the voyage in his letter to the royal treasurer of Spain.

Learn about the early life of Columbus and his life after this first voyage through these biographies in History Reference Center in the Christopher Columbus article in Encyclopædia Britannica. For a scholarly examination of his discovery and its impact on the world, take a look at some of these articles in World History Collection.